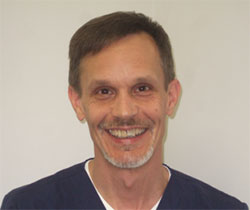 Dr. Kurt B. Olson knew as a teenager that he would become a Doctor of Chiropractic. He suffered an injury during a wrestling match when he was 14. It was so severe, he was unable to take a full breath of air. Dr. Olson’s mother, a Registered Nurse, declared nothing broken and took her son to her Chiropractor, who made one adjustment for a subluxated rib, and the young wrestler’s breathing returned to normal. “I thought that man walked on water,” says Dr. Olson today.

The experience influenced Dr. Olson, and he became totally focused on diagnosing and treating musculoskeletal injury and illness. He did his undergraduate work at James Madison University and in 1985 received his Doctor of Chiropractic from Northwestern College of Chiropractic (now Northwestern Health Sciences University, MN). Dr. Olson completed extensive coursework in acupuncture and consequently has a keen understanding of the body’s nerve pathways, which is essential knowledge to help the body heal itself.

After graduation, Dr. Olson joined a progressive, multi-disciplinary practice in Arlington, which offered services in podiatry, family practice medicine, acupuncture, neurology, nutrition, and massage. As a result of the five years he practiced there, Dr. Olson became a very medically-oriented Chiropractor. In 1990, he started and grew his own practice in Dale City, VA.

Dr. Olson’s goal is to get you in, get you better, and get you out. A mechanically-oriented practitioner, he believes that if your body’s structure is kept maintained, healthy function will follow.

Dr. Olson is licensed by the Board of Medicine of the Commonwealth of Virginia, and is dedicated to the care of his patients. Dr. Olson and his wife, Cherie, have two daughters, three grandchildren, and a Pekingese puppy named Max.

A typical Minnesotan of Norwegian descent, Dr. Olson loves the Minnesota Vikings and “hot dish” (you will have to ask him about it).